Our Gallery: Before It All Began

OK, now we know when the Diesel Era starts – on November 12, 1918, right after the Armistice. The date is agreed, so let us prepare for the International Dieselpunk Day!

But the date doesn’t mean we cannot look into earlier period for inspiration and information. Here is a gallery – the first in a row of three or four, – inspired by various discussions on dieselpunks.org. With (almost) no weapons, automobiles and aircraft. Just some useful devices and a touch of style.

If 1900s and 1910s are claimed by Steampunk, Dieselpunk can also lay a claim. Actually, it is possible to build a 100 per cent dieselpunk setting from technologies and artifacts available before 1920 or even 1914. First of all, diesel engine is here since 1897.

A perfect example of the stationary diesel engine built in 1915 in Graz, Austria-Hungary. We have to wait until 1923 when a diesel will be put in a truck but the first diesel motor vessels were commissioned in 1903 in Russia and France, and only a year later the French Navy had its first diesel submarine. By the way, do you know what was the first ocean-going surface ship fitted with a diesel?

The answer is quite surprising:

The Norwegian research sailship Fram traded her steam engine for a diesel short before the start of 1910-1912 Antarctic expedition led by R. Amundsen. There was no radio onboard but the wireless communications spread fast: in 1912 the United States Congress passed the Radio Act that mandated that all radio stations in the US be licensed by the federal government, as well as mandating that seagoing vessels continuously monitor distress frequencies. The new federal law, being a relatively quick reaction to the Titanic tragedy, replaced the Wireless Ship Act introduced two years earlier. Knowing all this, how can we limit the Radio Age to 1920s-1940s? Still, in 1913 the radio signal from the Eiffel Tower received in London was described as a miracle:

Greenwich Time in the Home by Wireless From Paris. © Time Inc.

Relax, relax! They are only adjusting their watches. By the way, watches: of course, pocket timepieces were the most acceptable, but wristwatches rapidly gained popularity, especially during WWI:

Hannibal Ford already developed an electric-mechanical “target computor” for the U.S. Navy. And data-processing devices were aplenty, like this tabulating machine used for 1919 Census: 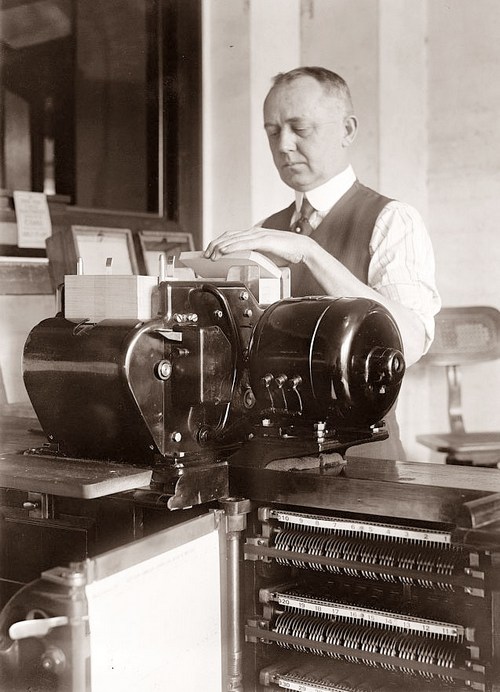 All kinds of adding machines, arithmometres and cash registers available as early as in 1914 can fill a hundred pages of our Encyclopedia. Probably some day we will praise them in a special gallery. In the meanwhile, another technological achievement: color photography. Color, not colorized:

Léon Gimpel. Aeronautic Exhibition at the Grand Palais in Paris. 1909

The shot was made using Autochrome glass plates. The Autochrome technology was patented by the Lumière brothers in 1903 and marketed since 1907. Speaking about photography, it is always a pleasure to remind about the Ur-Leica – a 35mm camera developed by Oskar Barnack:

The prototype of the most famous Diesel Era camera was ready in early 1914 – several months after the launch of the Tourist Multiple, the first serial-produced 35mm photo camera made by Herbert & Huesgen, New Ideas Mfg. Co. You can find other early “small format devices” here.

Dictaphone, patented in 1914, was just one of many voice recording devices offered to a modern businessman or civil servant:

What else can we borrow for the setting? Were there any refrigerators? You bet!

Maybe the term “corporate identity” was invented only in 1940s but in the beginning of the 20th century there were at least two corporations with a distinctive style of their own – London Underground (UK) and AEG (Germany). Both used unique, instantly recognizable typefaces, color sets and style elements. 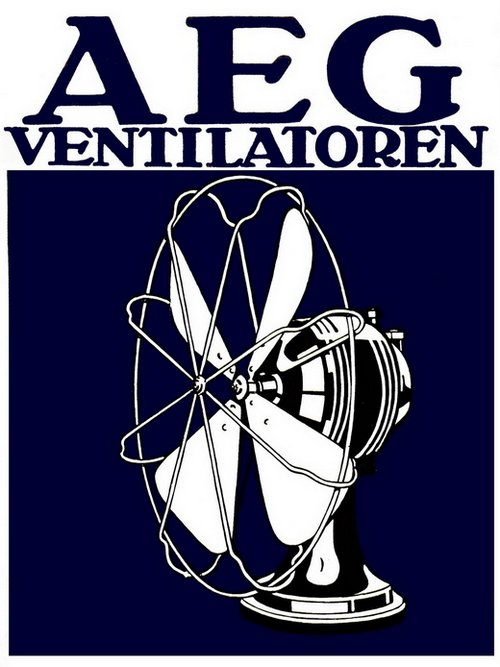 The person in charge of the AEG corporate identity, Peter Behrens, was not only an artist and designer but one of the greatest European architects. In 1908, he designed the Turbinenfabrik, AEG turbine factory in Berlin: 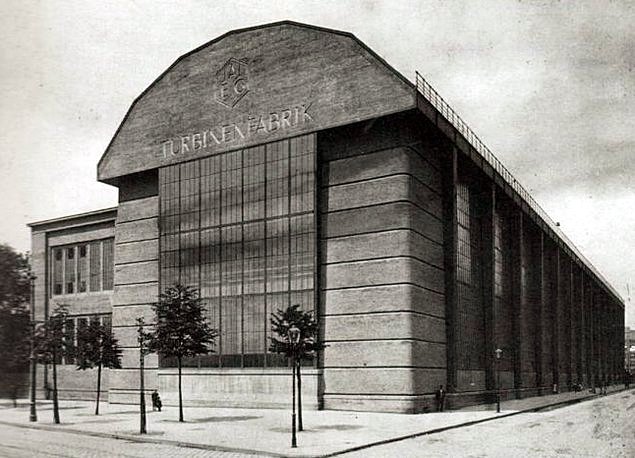 Old-fashioned? Not a bit! A century ago, this massive structure was ultra-modern.

In Vienna, the flagship of the modern architecture was the Postal Savings Bank building designed by Otto Wagner (1906):

Another Austrian architect, Josef Hoffman, designed the Palais Stoclet in Brussels as early as in 1905: 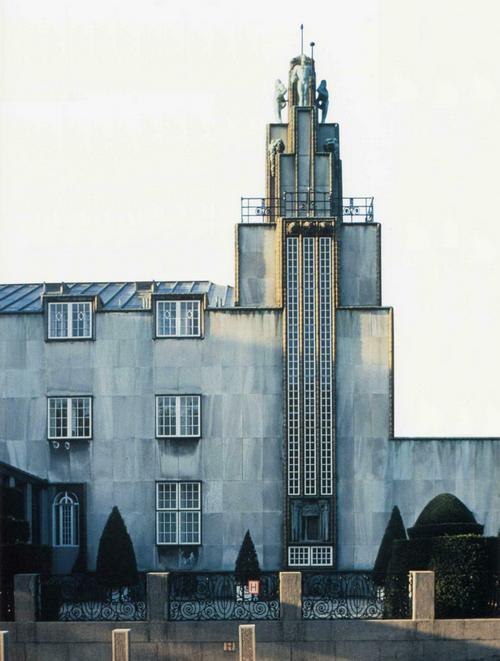 Art Deco twenty years before the Paris Exhibition! It’s not an exaggeration – some art historians see Hoffman as the precursor of Art Deco.

And what about “the land of the free and the home of the brave”? The United States boasted not only the most advanced construction technologies but also strikingly modern buildings:

A lot could be said about the skyscrapers but one picture is worth a thousand words: 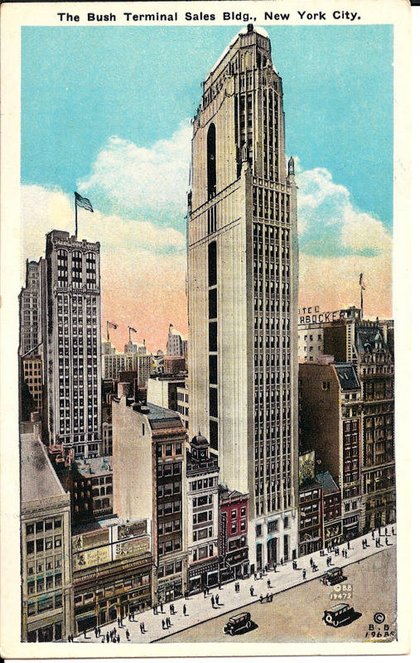 Welcome to the Gotham City! Designed by Harvey Wiley Corbett, this modest-sized tower in Midtown Manhattan (1917) influenced a lot of Diesel Era architects.

We won’t hide from you the Parisian manifest of modernity:

It is the work of architect Auguste Perret, with an exterior bas relief by Antoine Bourdelle, a dome by Maurice Denis, paintings by Édouard Vuillard and a stage curtain by Xavier Roussel. The theatre was founded by journalist and impresario Gabriel Astruc with a view to providing a venue suitable for contemporary music-making, dance and opera, unlike traditional, more conservative institutions such as the Paris Opera. Accordingly, it housed the Ballets Russes for its first season and consequently the world première of what many deem to be the most influential ballet and musical work of the twentieth century: the Rite of Spring.

It is easy to call it “Art Deco”, but the theater opened its doors in 1913, twelve years before the term “Art Deco” was coined.

The photograph was taken in 1929, the construction started in 1919. Hyperboloid structures were built in Russia since 1890s. Shukhov techology was used by the U.S. Navy for lattice masts – iconic but rather impractical in a warship.

In terms of fashion, however, there’s not much to display. Even at this page from a 1919 magazine, style is still very far from what we use to call “dieselpunk”:

Of course, double-breasted “Rocketeer jacket” existed before 1920. Just like many accessories usually associated with the Diesel Era. And this photograph, so full of dieselpunk spirit, was taken between 1910 and 1915.

For a dessert, a small masterpiece played by a New Orleans musician who claimed he invented jazz back in 1902:

Have a nice weekend!

6 responses to “Our Gallery: Before It All Began”