World War II and visions of “world that could be”/”future that never was” are all-important for dieselpunk literature. One of the most influential novels is Fatherland, written by Robert Harris, though it’s not exactly “~punk” but an alternative history in which Germany defeated Continental Europe and the Soviet Union in World War II, with Great Britain as a German puppet state. The result is a Cold War between the United States and Germany rather than with the USSR.

Another trend-setting novel, Philip K. Dick’s Hugo Award-winning 1962 alternative history The Man in the High Castle, also considers the question of what would have happened if the Allied Powers had lost WWII. “Some 20 years after that loss, the United States and much of the world has now been split between Japan and Germany, the major hegemonic states. Through a collection of characters in various states of posing (spies, sellers of falsified goods, others with secret identities), Dick provides an intriguing tale about life and history as it relates to authentic and manufactured reality. “ (Reed Business Information annotation @ Amazon.com)

Examples of other dieselpunk or dieselpunk-related novels are Shadows in the Mist by Brian Moreland, Tales of the First Occult War by Kevin Cooney, The Keep by F Paul Wilson, and Fiends of the Eastern Front by David Bishop. 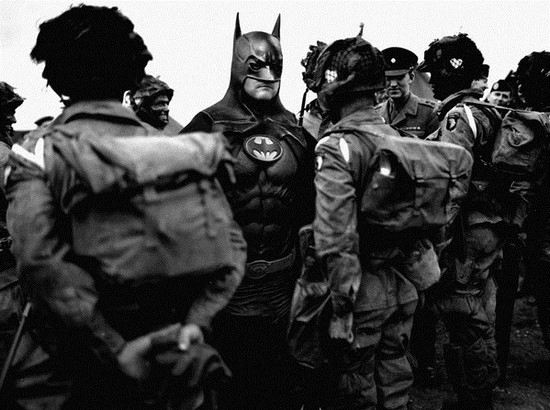 There are several short stories that one might call dieselpunk. One such example is Lucky Strike by Kim Stanley Robinson which involves an alternative ending to the decision to drop the atomic bomb on Japan. Another example of dieselpunk short story was The Death of Captain Future by Allen Steele, which won a Hugo Award. Both were published in The Best Alternative History Stories of the Twentieth Century edited by Harry Turtledove with Martin H. Greenberg.

A feature that was first identified by the online magazine The Flying Fortress is that dieselpunk can be divided into two primary themes or styles: Ottensian and Piecraftian. The dividing line between the two themes is commonly acknowledged as the start of World War II.

One theme, named “Piecraftian” after its proponent author “Piecraft”, focuses on the aesthetics of the world wars and speculates on how human culture could theoretically cease to evolve due to constant, widespread warfare. According to Ottens and Piecraft this theme continues the aesthetics of the diesel era into later periods of history by describing a world where survival (largely based on a reliance on diesel power) is placed above aesthetical evolution (as seen in such dystopian movies as Mad Max).

A second theme, named “Ottensian” after its proponent author Nick Ottens, focuses on a setting where the decadent aesthetics and utopian philosophies of the American “Roaring Twenties” continued to evolve unhindered by war or economic collapse. Ottensian dieselpunk fiction is primarily concerned with a positive vision of technology, where the utopian ideals predicted by the World’s Fairs of the times came to light. As a result Ottensian dieselpunk incorporates “an enthusiasm for the predictions about the future,” and often shares elements with retro-futurism.

In 2011, at least three new novels were defined as “dieselpunk” by their authors. One, Fistful of Reefer by David Mark Brown, is “a dieselpunk, weird Western pulp w/goats, guns & the camaraderie of outcasts. ” In an interview for dieselpunks.org the author explained: “Growing up on a Texas ranch during the eighties, I learned to ride and round up cattle while wearing sneakers and a cap, and listening to Depeche Mode via Walkman.  So it seemed only natural that once I found my rhythm as a writer I would end up creating dieselpunk, weird-Western pulps. “

During 2011, Larry Correia published two novels in the Grimnoir Series, Hard Magic and Spellbound. The author posted on Dieselpunks.org, “When I wrote it I’d not even heard the term “diesel punk” but it fits.”

In Russia, Maria Chepurina published her novel S.S.S.M (orig. “С.С.С.М.”, Самая Счастливая Страна Мирa, World’s Happiest Country). It’s a retro sci-fi thriller based on utopic ideas of Tatlin and other Russian revolutionary idealists of 1920s. The setting relies on 1920s and early 1930s aesthetics, though the action is set in 1941.

Another Russian author, Igor Nikolayev, published a novel titled Iron Wind (orig. “Железный ветер”). The action is set in 1950s’ parallel world full of giant dirigibles, floating fortresses and submarine battleships. There is no heavier-than-air aviation, and the “water world” is vulnerable to the invasion of properly equipped Nazi villains from our timeline. 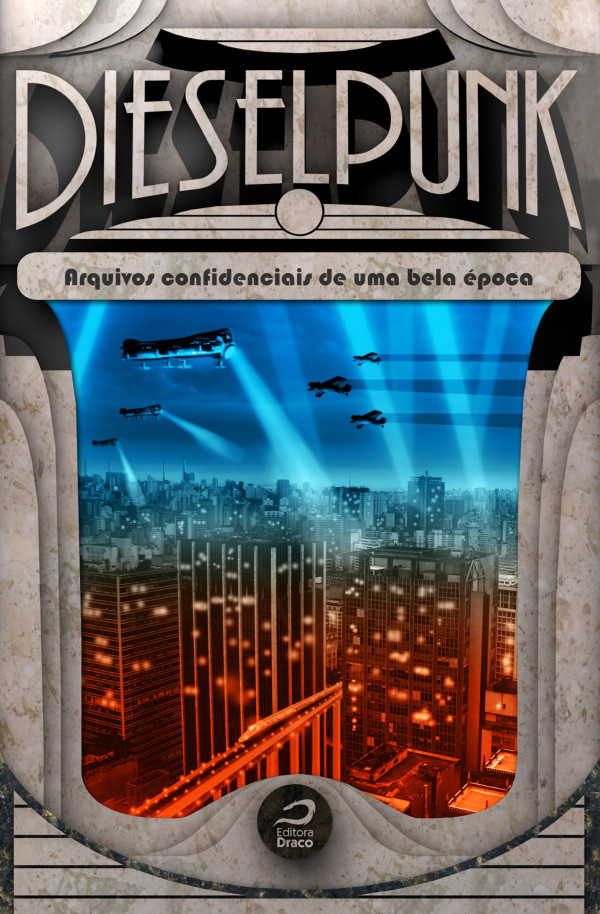 In June of 2012, Stefan Prohaczka published a collection of his artwork titled “Diesel City.” The publication includes not only the artwork of Prohaczka but includes a description of Dieselpunk as well as a noir style storyline that combines the art with a postmodern narrative. Tome Wilson who maintains the web site Dieselpunks.org provided the English translation of the storyline.

Another 2012 première is The Troubleshooter (New Haven Blues) by Bard Constantine. It’s set in a post-apocalyptic dieselpunk world packed with retrofuturistic artifacts and noir scenes mood. The setting is dystopian but not depressing, thanks to the lively and cynical narrator/main character, a hard-boiled private investigator Mick Trubble.

On February 18, 2013, an e-book anthology of four short stories was released titled “The Dieselpunk ePulp Showcase.” Authors included Grant Gardiner, John Picha, Bard Constantine, and Jack Philpott. It is free for download and available in a variety of formats.

According to the web site Digital Spy, an official Iron Sky a graphic novel has been finished. The graphic novel will be published by IDW Publishing. Mikko Rautalahti is the author and the artist is Gerry Kissell.

The dieselpunk novel Silent Empire was published June 30, 2013, written by Bard Constantine and illustrated by Stefan Prohaczka. Bard Constantine stated in an interview on the Diesel Powered Podcast that he was inspired by Prohaczka’s illustrations and that he and Prohaczka collaborated closely in the creation of the novel.

According to Constantine’s web site:

“Franklin is a man haunted by visions of a family he can’t remember and the growing awareness that his world is a fabrication by oppressors who control every aspect of his existence. After being contacted by the mysterious Coalition, Francis is reluctantly persuaded to find the answers that elude him. His pursuit of truth puts him in a duel of wills against the Sovereign, the oppressive empire that uses the machine of propaganda combined with the brutal terror of their Dogmen to smother any spark of rebellion.

The Coalition reveals the Sovereign’s technological prowess that has trapped its inhabitants in a lethargic state to prevent rebellion of any sort. Franklin is the only person on the inside whose mind is active enough to resist and take action. With time running out and his life at risk, Franklin must choose between defiance or submission; a decision that will either further imprison him… or shatter an Empire forever.” 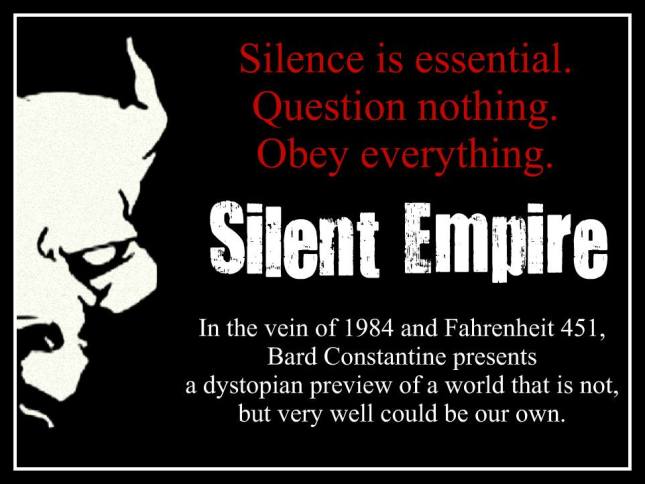 Dallas-based Twit Publishing published Dieselpunk: an Anthology on February 10, 2014. According to the publisher web site, “Travel to an alternate Diesel-era which never was (but god, we wish it had been!). Rip through the roaring 20s, drift through the depressed 30s, and fight your way through the 40s.”

A Fistful of Nothing: A Dieselpunk Noir Novel (The Hollywoodholes Sonata, #1) by Dan Glaser was published on March 15, 2014. According to the back cover,

The Great Depression never ate the country alive. WWII refuses to put out its raging fires. Every major city across fifty states has been blown sky-high by blitzing.

The only choice the denizens of a war-torn Los Angeles have left is to plunge into the deep dark of the metro tunnels and make a new life in the ruins of the subway rails below–with elbow grease, neon, and blood. In the crumbling catacombs beneath Hollywood, an ex-private eye named Jim “Jimbo” Maynard scours the dead, dark underworld for payoff on a gamble gone wrong, but stumbles instead on a subterranean metropolis divided by vice, vendettas, mysteries, and murder plots. In order to hunt down the butchers of two seemingly unrelated corpses, Jim will come up against warring mob bosses, backstabbing bookies, mad inventors, tin titans, bootleg rum-running, corrupted coppers, and electromagnetic revolvers.

Welcome to The Hollywoodholes. Welcome to your chrome coffin.

On April 7, 2014, a second “The Dieselpunk ePulp Showcase” was released. This issue includes short stories by nine authors. Like the first, it’s free for download and available in a variety of formats. 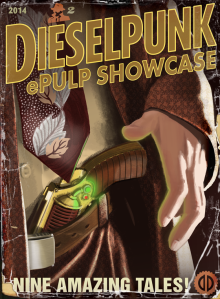