END_OF_DOCUMENT_TOKEN_TO_BE_REPLACED

Our Gallery: The Streamlined World of Robert LaDuke

Only recently we discovered a modern artist who perfectly combines Diesel Era artifacts with today’s attitude. His artwork won’t seem out of place in a 1930s club or post office or gallery. But is it old-fashioned? Just well-rooted.

LaDuke’s narrative paintings are a combination of memories, dreams and everyday life, and as such his work remains open-ended. Paintings which tell a complete story from beginning to end are not compelling to him. He puts a lot of personal iconography into each piece, but does not wish to dictate a strict narrative.

LaDuke prefers viewers find their own interpretation of his work. Ideally, LaDuke’s desire is to paint works which create more questions than answers. Viewers are free to imagine multiple meanings in his work…

We can add something: Robert LaDuke’s post-modernism has a lot in common with 1920s and 1930s metaphysical art. The objects – all these aircraft, locomotives, skyscrapers, cars and trailers – are recognizable and realistic but the atmosphere is surreal, enigmatic, unpredictable.

Let’s open our eyes and turn our imagination on.

END_OF_DOCUMENT_TOKEN_TO_BE_REPLACED

Posted by dieselpunksencyclopedia on August 31, 2012 in art, dieselpunk, inspiration

END_OF_DOCUMENT_TOKEN_TO_BE_REPLACED

Our Gallery: The Art of Alexey Lipatov

Dieselpunk Encyclopedia is proud to present one of our movement’s most famous creators: Alexey Lipatov. His contribution to the genre goes far beyond the images: this Ukrainian artist shows a wonderful ability to catch the spirit of dieselpunk and to present in a most precise and attractive way. No wonder that some of Lipatov’s works were turned into posters, wallpapers and avatars. It’s so easy to fall in love with this brave new world of flying boats and hovercrafts, smiling girls and adventurous pilots, with a light touch of noir and horror – just for fun.
We hope… no, we are sure you’ll enjoy this short selection. 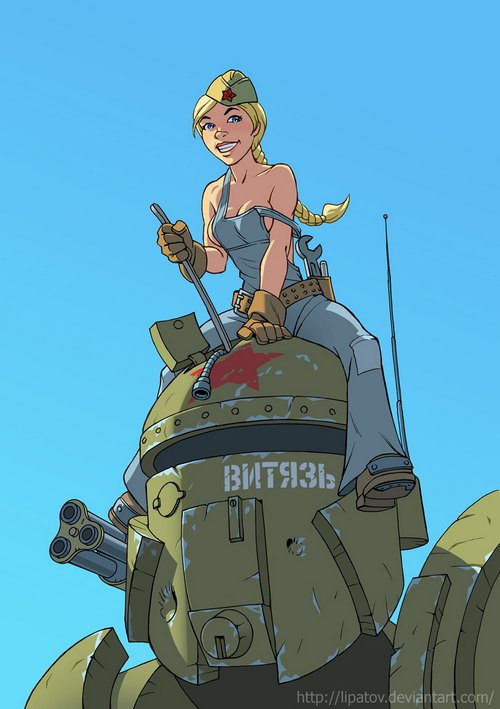 END_OF_DOCUMENT_TOKEN_TO_BE_REPLACED

Posted by dieselpunksencyclopedia on May 4, 2012 in art, community, dieselpunk, machines

Our Gallery: The Future That Never Was

Let us begin with a few quotes from donaguirre‘s gallery @ Deviantart:

Eldorado, a former colony of the Kingdom of Albion, became an independent monarchy in 1776 (“No Eldoradian King – no eldoradian taxes !”), when the King of Albion addressed the elected King of Eldorado as “mon frère” for the first time in the “Dépêche fraternelle”, which is nowadays exhibited in the N.H.City National Museum. Monarchy became constitutional with the end of the Eldoradian civil war (1861-65), when the confederate states abolished absolutism. The Kings name is Jacob ever since (the royal coat of arms reads “Iacobus Rex”), but most Eldoradians use to refer to his majesty as “Jack”.

Two Elekktra-II support airships maneuvering in the docking perimeter of Atlantis station. Elekktrae docked the MPRP on a regular base to keep both, technical installations and crew, operational. A common air force nickname for HE-II standard support vessels was “Milk Cow”, abbreviated as “MC” in radio code.

An early Elekktra class (HE-I) rigid airship entering the landing perimeter of the Westworld Testing Facility “WTF”, (sometimes called “Where The F***), also known as “the dry castle” or “napkinworx”, as the area was situated in the Western Territories’ vast desert regions and due to Citizen Hugges’ often documented habit to scribble ideas onto napkins while in a restaurant to “save them for mankind”, expecting his technical staff to bring them to fruition exactly as seen on his 30 second blueprint. 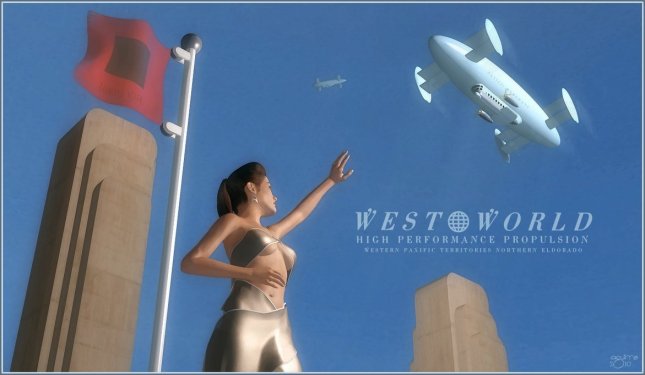 The Future That Never Was by donaguirre (2010)

…in short, a whole brave new world with its own history, folklore and humor. Sometimes dark, sometimes full of sunlight, always streamlined and uncompromisingly dieselpunk. Welcome to the Future That Never Was!

END_OF_DOCUMENT_TOKEN_TO_BE_REPLACED

Posted by dieselpunksencyclopedia on April 23, 2012 in art, dieselpunk, inspiration, machines

Our Gallery: Streamline is Dieselpunk

How do you like your dieselpunk – brutal, greasy and all-riveted or sleek, polished and shiny? No matter. Most probably, it will be served streamlined. Beautiful curves, shaped in wind tunnel, go well with any device of your choice – from express train to desktop radio.

This picture was taken in 1934. First US-designed streamline passenger car and one of the first streamline articulated trains together. Both were inspired by aeronautical technologies. First and foremost, by airships – what could be more streamlined?

END_OF_DOCUMENT_TOKEN_TO_BE_REPLACED

Posted by dieselpunksencyclopedia on March 3, 2012 in art, dieselpunk, inspiration, machines

Our Gallery: In Memory of a Friend

His pictures, rough and expressive, looked amateurish and even primitive when put together with paintings and graphics of Keith Thompson or Dusso. His comments were simplicity itself. But behind this deceptive image was a man of the world inspired by Futurism and Vorticism, Art Deco and revolutionary posters. A man in love with aviation, automobiles and skyscrapers. A visionary who didn’t care much about public opinion.

Here’s a small gallery of Vladimir Ozerny’s drawings and compositions, taken from his blog.

Posted by dieselpunksencyclopedia on February 25, 2012 in art, community, dieselpunk, machines

When we talk dieselpunk, ‘megalomania’ doesn’t sound like an obscenity or a diagnosis. The genre is inspired by the Interbellum aesthetics, and no one can argue that between two world wars size did matter, the bigger the better. In this gallery there are no abandoned projects and paper designs. Only real giants.

Let us begin with an undisputed dieselpunk icon, the airship. Not just a dirigible but a flying aircraft carrier: 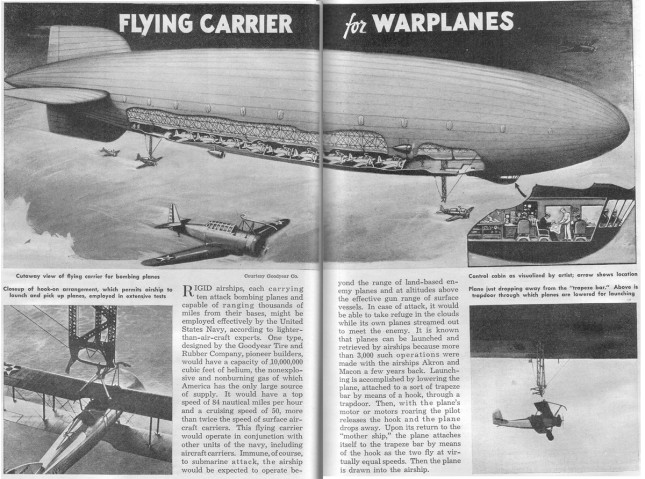 The concept was already obsolete when this picture was published but carrier airships existed a few years before – see USS Macon and Akron.

Another nice try to increase the operating range of piston-engine aircraft: the Mayo project: 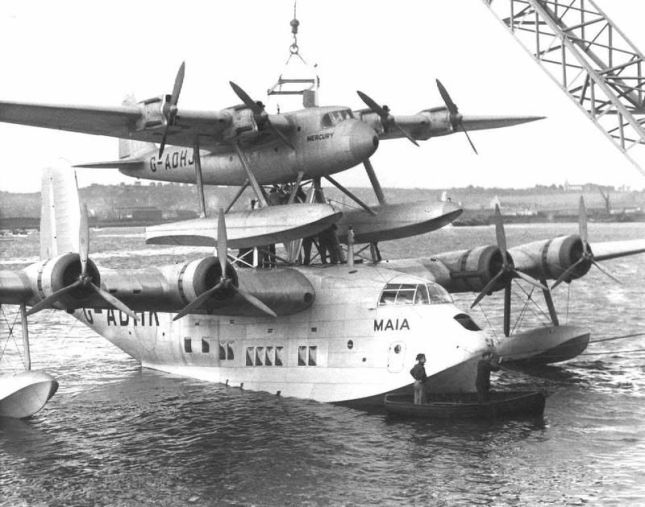 The Short Empire Class S.21 Maia was not the largest flying boat of the period – but large and powerful enough to carry a four-engine floatplane.

END_OF_DOCUMENT_TOKEN_TO_BE_REPLACED

Posted by dieselpunksencyclopedia on January 28, 2012 in dieselpunk, inspiration, machines