Some dieselpunks do not need a watch. They are happy with their computers, cell phones and all kinds of gadgets, each one fitted with an electronic clock. For those who are looking for a “timepiece in style”, we are here with some tips.

Disclaimer: Dieselpunk Encyclopedia is a non-commercial body. All images are posted here on their aesthetical, historical and educational value only.

Since the Diesel Era was the Golden Age of aviation, pilot’s watch is a most obvious choice. But don’t hurry to shop for oversize multi-dial timepieces – nearly an inch thick, two inches wide, weighing half a pound and sporting a huge crown. First of all, will it fit your hand? What is good for the former Governor of California is good for someone else not for everyone. Second of all, sometimes understatement is the best statement. And the Golden Age aviation timetools with all their complications and navigating/calculating capabilities, were of modest dimensions. 70 years ago, a 42mm-wide watch, “normal” by today’s standards, was definitely oversize. The vast majority of aviation chronometers and chronographs were 35-39mm wide (w/o crown).

Another remarkable chronometer, produced for the Czechoslovak Air Force, has a tremendous effect of presence without being oversized:

By the way, have you noticed the complicated shape of the case? If not, here is another watch built to the same specification: 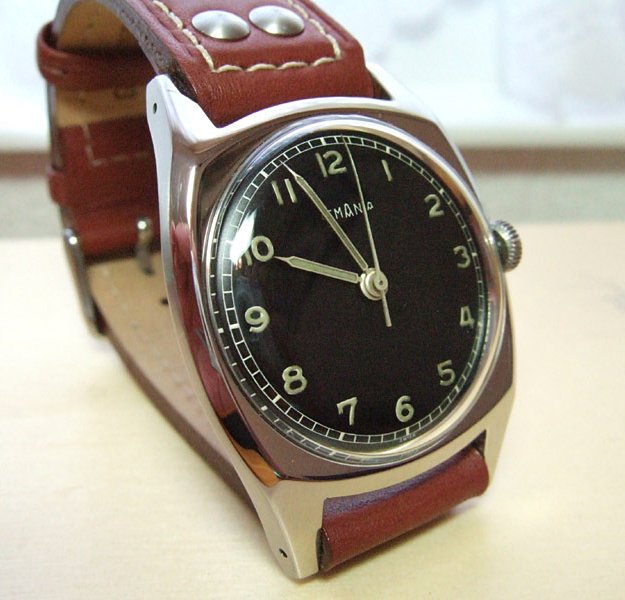 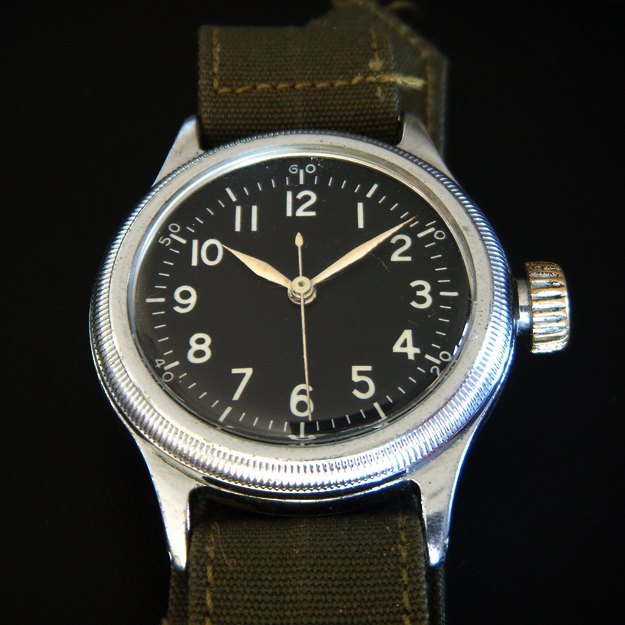 All A-11 variations made by Elgin and Waltham, as well as US Navy and USMC Hamilton watches, were of the same “kid watch” size. Reliable and user-friendly, they had a hack function allowing the aviators and other servicemen to literally synchronize their actions.

On the other hand, there were a few true giants. We mean the B-Uhr or Aerial Observer’s Watch produced by five watchmakers (four German, one Swiss) for the Luftwaffe from 1939. They were of two types:

Their enormous size – 55mm! – is quite practical considering the Air Ministry requirement to use a high-precision pocket watch movement and the fact that the B-Uhr was supposed to be worn on the sleeve of a flight jacket. Now try to wear it on your hand. Do you like the feeling? You really do? Hello Arnold!

The B-Uhr design is widely copied and imitated. There are some limited edition 55mm replicas made by the original manufacturers (Stowa and Laco), but most modern variations are significantly smaller, ranging from 36 to 47mm. Another German aviation timetool, the Tutima Flieger, is of “normal” dimensions – 39mm:

One more undisputed classic, the Weems Second-Setting Watch, a timepiece with a mobile inner dial invented by Lt. Cdr. Philip van Horn Weems, one of the pioneers of aviation. Weems developed a way to synchronize a watch with the closest second using a radio time signal without moving the hands. In collaboration with Longines he was able to invent a watch that took the error out of the wristwatch many aviators used for positioning, fuel consumption, time to runway thresholds and any time critical operation that an aviator undertook.**

Another legendary Longines aviation timetool was invented by no other than Col. Charles Lindbergh. When he took his momentous flight from New York to Paris in 1927, there wasn’t any control towers to guide him. It was just a pilot, his flying machine and the clear blue sky. Autopilot wasn’t even a dream over the horizon. While Lindbergh didn’t have to worry about smashing into another aircraft, because there weren’t that many others up there, he had other concerns. Like making sure he was going in the right direction.

What does it take to point your plane over a mountain rather than into one without electronic equipment? You need to calculate longitude on an accurate watch that takes into account the variations in time around the globe. When you’re zooming 10,000 feet above the ground in a single-seat, single engine plane, you don’t want to be fiddling with pencil and paper. Lindbergh used the Hour Angle Watch, built by Longines in 1931 to Lindbergh’s specifications, to make his calculations and maneuver safely in his flying machine exploits.

It came in a gargantuan 47mm sized case to accommodate a large enamel dial that was easy on the eyes. The watch displayed Roman hour numerals along with an inner calibrated degree angle ring with blue Arabic numerals, inner rotating silvered matte disc calibrated for 60 seconds and 5 degrees, revolving bezel in green enamel calibrated for 15 degrees, subdivisions in black enamel and indirect seconds, tools necessary for intrepid pilots to find their way. A large and chunky, onion crown popped out from the case, enabling a pilot to wind the handwind movement with gloves on. Remember, it was freezing at 10,000 feet in an open cockpit. A hunking leather strap fit over the flight suit to secure the watch.*** Needless to say, variations of the Lindbergh Hour-Angle and Weems Aviation watches are still manufactured by Longines.

Just for a change, a typical 1930s chronograph:

Too much detail? Well, there were “cleaner” timetools, each one of them making a perfect dress watch retaining all its functionality. Just two examples:

Next month we’ll review some other Diesel Era watches – to bring you more inspiration. Have a nice weekend!

*** THIS or THAT: The Lindbergh Hour Angle Watch Then and Now, WatchMatchMaker

Posted by dieselpunksencyclopedia on May 12, 2012 in dieselpunk, inspiration

One response to “Our Gallery: Dieselpunk Timetools”